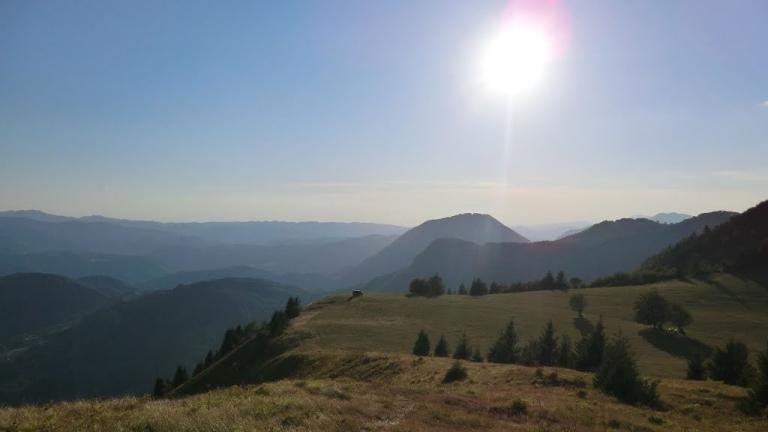 The first road leads from Cerkno to village Novaki. Follow notice boards which mark Ski Center Cerkno in črni Vrh. When you arrive to the notice sign which shows the way to čelezniki, follow it to the sedlle, where there is a parking place for Ski Center Cerkno. Then go via the only road which turns upwards left. The road will lead you over a mountain crest to the sedlle which is called Razpotje (crossroads), there is a notice board which shows the way to the mountain Porezen. Go straight ahead via the only one road which goes upwards towards a farm on the edge of a forest, then forward and upwards through shady side of crest which ends in Vrše. In front of you, you will see a flat plateau which ends towards south with a steep slope. Here you are on the lower start, the start number one. The start is situated on the left side of the exposed crest in the direction SW, right upwards cca 15 min. By walking over the crest you come to the upper plateau which ends with a very steep slope. There is our upper starting place from Vrše.
Second road which leads to Vrše is a short cut. It is steeper, but makes a possible quick ascent to the start. From Cerkno you must go via a road from village Poče, direction north. Road signs will lead you to village Poče. From here a very good marked footway to Porezen starts. It takes one hour walking to the start places that is why I recommend that you go past fire station, which is situated cca. 150 m away from a smaller parking place. There you go via the road which turns right behind a house which you see in front of  you. Right after that there is one short ascent, immediately after that there is one short descent which repeats a couple of times. Go to the main road and don\'t look out for small roads which lead in the woods. You will come to the crossroad where one way goes straight and downwards, the second goes sharp left and upwards - this is the right one. It will lead you to the sedlle where you will see a sign Planinska Koča mountain hut, which shows left upwards. From here it takes 30 min by foot. You can continue throw the wood via wood path which ends at the farm Pr Brejcu where you must turn left upwards. Cca. 2 km steep asscent will lead you to the crossroad Razpotje. From there the way is described in the upper paragraph.
Landing Places:

There are two landing places: the first one is near a gas station, on the left side of the road, immediately when we come to Cerkno from the direction Idrija. But this landing place is not official and it\'s not recommended for inexperienced pilots. There is namely not a lot of space for landing.

The second official landing place is near village Gorje. This one is suitable for all kind of pilots.
Warning!
Height limited to 2900 ASL, but few km E down to 300 m AGL - refer to Airspace map!